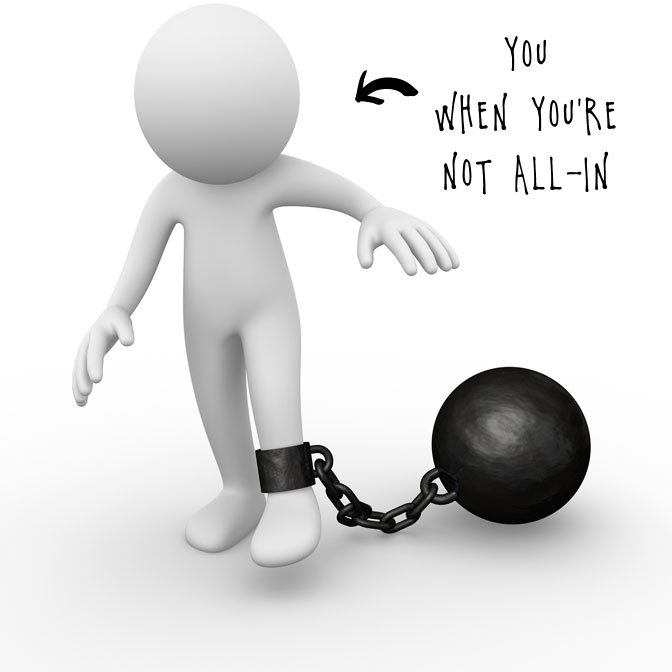 Always remember: you exchange your life for what you choose to do with your time. Here’s why you need to decide, right now, either to be all-in or to get out:

1. All-in or out with focus

When you’re all-in, you know without a doubt in which direction you’re headed. You might not know all the steps you need to take to get there, and that’s okay. What’s most important is being sure of where you’re going. That destination (whether it’s the final result of a goal or an actual place or the whole of your life) is the end point that you can hone your focus on. And what that does for you is make sure your energy is all going toward one destination. The good news for you: you’ll make a lot of forward progress when your energy and your direction are aligned.

When you’re partially-in, you’re not sure which direction is the most important. That makes it hard to tell which way, exactly, you ought to be headed. If you’re partially-in on a bunch of different things, that makes it even more challenging. You could head toward just about any destination. So you get pulled in different directions, maybe never settling on any one thing. You scatter your focus, which scatters your energy. The bad news: while you might make forward progress on different things, you won’t make much forward progress on any one thing.

2. All-in or out with decision making

Being all-in makes choices a lot easier. When you know your direction, then it’s an easy (or at least easier) yes to things that bring you closer to your end destination. Same goes with a no to those people/places/things that drag you further from where you want to be.

But when you’re partially-in, you’ve got choices in every direction you’re getting pulled. That makes it a lot harder to pick the right one. Then when you finally do pick one, you tend to second-guess yourself and wonder if you made the right call among all the possible destinations. So you waffle. And make lists of pros and cons. And ask for outside advice instead of listening to your own intuition. You often get stuck, paralyzed by indecision, so you don’t make any choices at all (which is also, I say kindly, a choice).

When you’re all-in, you pick up the pace (even if you’re moving slowly) because you’ve got a direction and someplace to be. That makes all your efforts purposeful and meaningful. You’ll find you’ve got more excitement when you’re all-in, which naturally means you’ll have more energy to keep going and see whatever you started all the way through. Think about it: Aren’t you the most motivated when you’re after what you want most?

The opposite is true, too. Nobody can move forward in a straight line when they’re being pulled (or pulling themselves) in different directions. All those directions take little slivers of your energy away from the whole. It drains you. You end up worn out. Answer me this: How motivated are you when you’re overwhelmed and exhausted? Not much, I’d guess.

The other problem that comes into play is all that indecision will eventually anchor you to a single spot, especially if you’re inundated with directions you might want to pursue. Then you come to a stop. You stay there not moving. Or you wind up moving in a circle, never making much, if any, forward progress.

4. All-in or out with self-doubt

Being all-in will alleviate much, if not all, of your self-doubt. You’ve made a decision to be all-in. You’ve set your final destination. So you step out in faith. Then you keep moving forward until you get there. You don’t entertain self-doubt (or at least, entertain it a lot less) because you know where you’re going and you’ve committed to see this thing through all the way until you finish.

On the flip side, there’s nothing worse to feed self-doubt than to not know exactly which way you want to go. When you’re partially-in, you get mired in: maybe it’s this or maybe it’s that or it could be this other thing. When you’re waffling and indecisive, self-doubt can really get a foothold. Then it’s a vicious cycle: not making a clear choice leads to more self-doubt, which leads to the clear choice becoming more muddled in your mind, which leads to even more self doubt. And on and on it goes . . . until you grind to a halt and give up, in which case self-doubt wins.

5. All-in or out with finishing

Deciding to be all-in takes away any escape clause out of the realm of possibility. That means you keep going no matter what gets thrown at you. Hard stuff. Easy stuff. Stuff that you never in a million years saw coming. Doesn’t matter. When you’re all-in, there’s no choice but to keep at it until you finish. That’s excellent news for you because you’ll reach where you most want to be. Even if you go slowly, as long as you keep at it, you’ll eventually get there.

But being partially-in gives you an automatic escape clause. You get a pass, or so you tell yourself, if whatever you’re doing doesn’t work out. Why? Because you weren’t really sure and your heart wasn’t truly in it. You’re not fully invested when you’re partially-in, which means that the outcome doesn’t really matter deeply to you. And so, when something hard comes along that blocks your way, you’ll just give up. Pick one of the other directions. Follow it until it gets tough. Quit. Choose yet another direction. And on it goes.

So if you’re not all-in, will you either choose to be or choose to get out today?