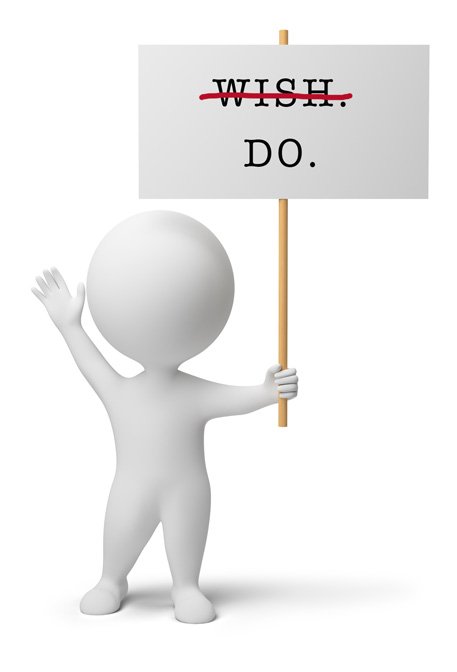 You need to stop wishing and start doing because wishing is nebulous and undefined. It’s you hoping you’ll get what you want at some unspecified point in the future. It’s you believing that maybe, somehow, it’ll magically show up in your life. Wishing lets you hang out in your comfort zone, tipped back in your squishy recliner with your feet up and your favorite beverage in hand. Wishing can be energizing and exciting at the beginning when you envision what you want. But wishing becomes frustrating and disempowering the longer you stay in your comfort zone and don’t get what you envisioned.

Doing is concrete and committed. Doing is you taking action to get yourself what you most want and/or to where you most want to be. It’s you being responsible for your own happiness and fulfillment. Doing is often scary and uncomfortable at the beginning. That’s why people (maybe you’re one of them) procrastinate and do pro/con lists and make excuses as to why not then back down and don’t take action. But doing (with the more action you take) can also be exhilarating and thrilling and make you want to get out of the bed in the morning.

(And if you’re afraid to stop wishing and start doing, read this first and make fear your friend.)

A body in motion tends to stay in motion; Newton made that the first law of motion because it’s true. Once you take the first step toward what you envision for yourself, you’ll naturally be drawn to taking the next step. And the step after that. And after that. And on it will go unless you say no and stop yourself. (And stopping yourself will likely take more energy than to simply keep going.)

2. Stop wishing and start doing to change your mind

You build connections in your brain all the time with every action you take/thought you think. These neural pathways are what streamline your brain’s processes and create habits. Being a doer instead of wisher is as simple as taking one (tiny if need be) step after the next in the direction that you want to go. With every action you take, you’re reinforcing that pathway in your brain that makes it easier to take the next step and the next.

3. Stop wishing and start doing to empower yourself

The first step is often the hardest because you’re venturing out into the unknown. But don’t worry because your comfort zone will expand to meet you wherever you are. And once you take that first step (and the next and the next . . .), you will realize that the power to create the life you want lies with you. Make no mistake: you create the life you’re living. And you get to create anything you want (oh yes, you do).

4. Stop wishing and start doing to prove to yourself how much you value yourself

Wishing, however, can chip away at your belief in your worth and value. If you wish too long and refuse to take action (and so your wish doesn’t come true), you will likely end up believing that you aren’t worthy of whatever it is you’re wishing for. You may also (intentionally or inadvertently) start believing that you are undeserving, incapable, don’t matter, are not chosen, and a myriad of other things that demotivate you and, in general, aren’t good for your well-being. And when you start thinking/believing those kinds of messages about yourself, you are reinforcing a neural pathway in your brain that you don’t believe in your own self at all.

Taking action and doing, on the other hand, reinforces the belief that you are worthy of both going after and having whatever it is you most want. Taking step after step, you will prove to yourself that you matter, that what you want matters, and that what you have/say/are/do matters too. You strengthen your belief in yourself with every step that you take in the direction of the life you envisioned.

5. Stop wishing and start doing to honor and respect yourself

So what will you stop wishing for and instead start doing today?