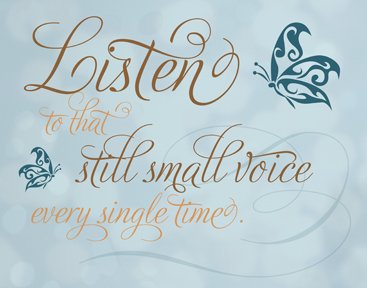 Sometimes I look at past decisions I’ve made and I just want to shake my younger self and shout, “Listen! Listen! For Pete’s sake, Listen!” because what I used to do all the time (& still catch myself doing on occasion) is charge ahead (think bull in a china shop) when I should have been stopping to check my gut & my intuition. Every (& I do mean every) major mistake in my life (ones that caused me lots of suffering) came from I did not listen to that still small voice inside me when it said: Don’t do this. This is a bad idea. Every missed opportunity came from me not listening when that same voice inside me said: Say yes, even if you’re scared, do that.

So here’s some advice that’s helped me on how to listen to that still small voice every single time:

1. To listen to that still small voice, you need to trust yourself

I’ve come to learn that a lot of people don’t trust themselves a whole lot. Maybe it’s the way they were raised. Maybe it’s from a lot of past mistakes making them gun-shy when it comes to making decisions. Maybe it’s from a harsh/nasty personal attack coming from someone else. Maybe you’ve spent a lifetime basing your choices on what other people want or their fears for your life.

So what ends up happening is you learn to refuse to listen to your own self. Whatever caused it doesn’t really matter. What matters is believing all the answers are already inside yourself. Your internal GPS is working, I promise. You just have to trust yourself and believe that voice inside telling you what to do really does know what’s best for you and what you really want. Really, it does.

2. You need to believe that small voice won’t steer you wrong

Sometimes it’s hard to listen to your own self when other people are wheedling, cajoling, guilting, threatening, pleading, whining, and the like. You might panic and second-guess yourself. Other times it’s just plain scary because that little voice knocks you clear out of your comfort zone (& honestly, how many people relish the idea of that?). So you may let fear rule until it drowns out everything else. Or maybe you let your head talk you into or out of (making excuses, justifying) what that voice is saying because you just don’t want to listen for whatever reason.

But I promise you that small voice inside you knows things that you might not even be willing to admit to yourself. It won’t steer you wrong.

3. To listen to that still small voice, get slow & get quiet & calm down

Slow down. Take a deep breath. Then take another. Calm down & get quiet. Honestly, I’ve learned (sigh, through much not listening) that it’s all about taking the path of least internal resistance. If whatever choice you’re facing makes you uneasy mentally or physically (for instance: you feel panicked, sweaty, nauseated, tense, like you just need to get the heck out of there, etc.), pay attention to that and decide accordingly (& yes, you are allowed to say no). Like anything you practice, the more you listen to your internal guidance, the easier it will be to keep doing it until eventually it just becomes second-nature & you don’t even have to think about it.

Your life will flow a lot easier when you learn to pay attention to your body cues and to that still small voice/nudge in your gut/whatever you want to call it & you do what it says every single time. Mine has, I can tell you that.

6 thoughts on “How To Listen To Your Still Small Voice”