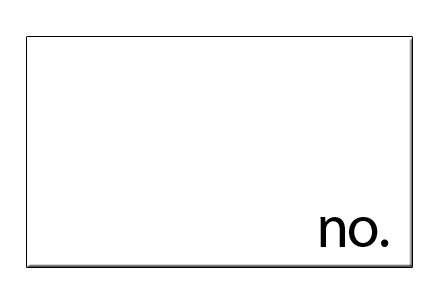 “‘No’ is a complete sentence. Saying no is a right we all have. Use it.” ~Anne Lamott

If you want any semblance of a life that matters to you, you must realize the importance of saying no and learn to say it. No to things that don’t get you closer to where you want to be. No to people who ask you for things you don’t want to do. No to your own self when it’s not good for you.

Saying no means you are allowed to have boundaries

A lot of people like to try to negotiate when you tell them no. They wheedle, cajole, beg, yell, manipulate, and/or guilt you among other things to get you to change your mind. First off, you don’t want those kind of people in your life (because not respecting your no, according to author Gavin De Becker (The Gift of Fear), means that person is trying to control you). And secondly, the fact is that no ~ No. ~ is a complete sentence. Period and all. You don’t have to explain, give excuses, defend yourself. None of that. It’s taken me a while to learn that.

Saying on in an enlightened way

I’m reading this great book, The Big Leap by Gay Hendricks. In it, he talks about the concept of the enlightened no. Basically what that means is you say no to anything that doesn’t fit in with the focus of your life. It’s kind of like blinders on a horse, so the animal can’t see to the left or the right, it can only see straight ahead in the direction it’s going. Of course, it helps if you know the focus of your life and in which direction you want to be going. Here’s how to figure out your true North.

1. Be aware of how you feel (physically & emotionally) as you say yes when you really want to say no. How’d that make you feel?

Here’s how it made me feel:

2. Count how many times you say yes when you really want to say no.

Once you start paying attention, you might be surprised to learn how much time & energy you spend doing things you don’t want to do. Time and energy that could be better spent working toward the life you want.

Be your own champion by saying no

Do you believe in the importance of saying no?

3 thoughts on “The Importance Of Saying No”