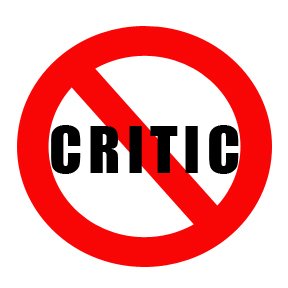 “It is not the critic who counts: not the man who points out how the strong man stumbles or where the doer of deeds could have done better. The credit belongs to the man who is actually in the arena, whose face is marred by dust and sweat and blood, who strives valiantly, who errs and comes up short again and again . . . who, at the best, knows, in the end, the triumph of high achievement, and who, at the worst, if he fails, at least he fails while daring greatly, so that his place shall never be with those cold and timid souls who knew neither victory nor defeat.” ~President Theodore Roosevelt (Speech at the Sorbonne, Paris, April 23, 1910)

Here’s something that’s sad but true: whenever you start to do a good work, there’s always gonna be someone who comes along to tell you what’s wrong with it or, worse, with you.

When I started this blog, I wasn’t exactly sure what I was doing, but I knew that I wanted to encourage myself and, hopefully, encourage other people. So that’s what I’ve been doing my best to do. Most, if not all, of my posts are not real controversial, at least I don’t think they are. How can you argue with positivity, right?

Well, you might be surprised to know that I’ve gotten quite a few negative comments and a couple of scathing personal attacks from people I don’t know and never met. I’d ask myself why but there’s probably not an answer for that or even if there is, it probably wouldn’t make a difference.

Here’s why it’s not the critic who matters:

So you keep going

You keep moving forward in the face of people who tell you that you’re wrong, misguided, can’t do it, won’t succeed, will embarrass yourself, they don’t like you, and on and on. You remember always: it’s not the critic who matters. And you listen to me instead. You’re the strong one. You’re the one who didn’t give up. You rock on & you keep going.

So do you believe that the critics don’t matter? Please feel free to share your thoughts & experiences in the comment box below.

29 thoughts on “Why It’s Not The Critic Who Matters”